In this top 5 list, we look at the most expensive stadiums in the world. While many extraordinary stadiums exhibit architectural and construction brilliance, these five stand out for their enormous budgets.

We love looking at every detail of a construction project from the steel handrail systems to the stair treads. But for this one, we’re going to take a step back and enjoy the ridiculous exuberance of some of the most ambitious stadia construction projects. So what can you actually get for a few billion? 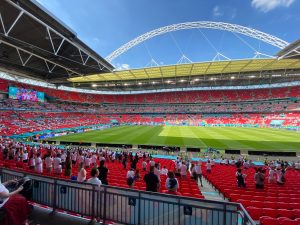 England national football teams’ home ground, Wembley Stadium. It cost £1.1 Billion (around $1.5 billion at the time and over $1.8 billion when adjusted for inflation).

Wembley has many unique points and several records. For example, it has the largest roof-covered seating capacity in the world. The iconic stadium has a sliding roof and an instantly recognisable lattice arch that spans over 1000 feet. 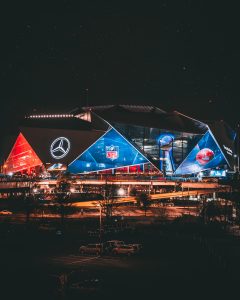 With an estimated construction cost of $1.6 billion, the multi-purpose Mercedes-Benz Stadium is one of the most expensive in the world. It is in Atalanta, Georgia and serves as the home stadium for NFL team Atlanta Falcons and MLS football club Atlanta United FC.

The standout feature of the stadium is its retractable roof. Its “pinwheel” design, as explained by architect Bill Johnson, was inspired by the Roman Pantheon. The eight retractable panels that make up the roof are made of clear polymer material that can control light by adjusting its opacity. Much of the outside building is made with clear polymer or glass, which gives a great view outside. The middle concourse and upper bowl in the east end zone are notably absent to allow for an unobstructed view of the Atlanta skyline. 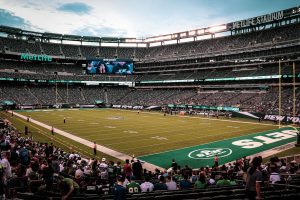 The MetLife Stadium in New Jersey, New York is the third most expensive stadium and the home ground of both the New York Jets and New York Giants NFL teams. Its approximately $1.6 billion costs made it the most expensive stadium in the world at the time of its completion. (Adjusted for inflation, MetLife would take second place on the list with an approximate cost of $2.02 billion.)

Whilst no longer the most expensive stadium, its staggering 82,000 capacity is still higher than the next two entries on this list. However, this is only the stadium’s capacity for NFL games. Its record attendance of 93,000 was set during Siyum HaShas (a Jewish religious celebration) in 2012.

The stadium’s design is inspired by the column dynamic seen in Manhattan skyscrapers as they looked to balance the differing preferences of both NFL teams. The Giants reportedly wanted a traditional look featuring exposed steelwork whilst the jets wanted a more modern look.

Where the design arguably best serves both home teams is its use of interior lighting, which can switch colours to reflect the team playing. The idea was taken from Germany where the Allianz Arena used it while hosting both Bayern Munich and 1860 Munich football teams. 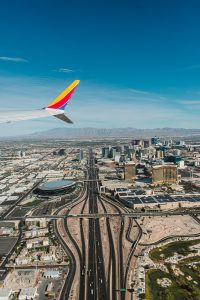 With a construction cost of $1.9 billion, the Allegiant Stadium in Nevada, U.S.A, is the second most expensive stadium in the world. It is the home stadium for NFL team the Las Vegas Raiders. It also hosts the University of Nevada, Las Vegas (UNLV) Rebels college football team.

The Allegiant is a 10-level domed stadium that carries much of its design over from the proposed Carson stadium. The stadium’s exterior is black and silver and includes a 275 foot media mesh video screen. One of the many unique things about this stadium is its 85 foot tall torch located at the north endzone area. The torch is in honour of the late owner of the Raiders, Al Davis, and is the largest 3D printed object in the world. 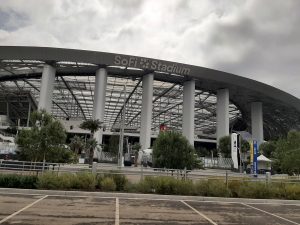 The SoFi Stadium, located in Los Angeles, U.S.A, is an impressive 70,000 capacity NFL stadium. The stadium had an enormous $5.5 billion construction cost and delivered a standard capacity of over 70,000 with capabilities to expand to over 100,000. The stadium is one of just two to be home to two separate NFL teams, LA Rams and LA Chargers.

SoFi stadium consists of a pedestrian plaza and performance venue in addition to the stadium. An independently supported million-square-foot transparent canopy covers these. The impressive canopy comprises 302 ETFE panels, 46 of which can be opened by a cable-supported net to provide ventilation. The canopy also includes 27,000 embedded LED pucks that can project images and video.

The Infinity Screen by Samsung, a first of its kind double-sided 4k HDR video board is suspended from the roof above the field. The Infinity screen displays 80 million pixels and houses a 260 speaker audio system.

The SoFi stadium was awarded the Outstanding Architectural Engineering Project of 2021 by the American Society of Civil Engineers.

Are these giant stadiums worth their equally massive budgets? There is no questioning the amazing ingenuity and engineering feats behind these gigantic projects. And with new stadiums continuing to break records, what can we look forward to in the future?

We have worked on an array of stadia over the years including Old Trafford and the Etihad. Speak to our team of expert designers and engineers about your stadium renovations, expansions and builds.